Need a policy because of a recent regulatory change? We’ve got it for you. Need some quick training on a specific HR topic? We’ve got it for you. HR Insider provides the resources you need to craft, implement and monitor policies with confidence. Our team of experts (which includes lawyers, analysts and HR professionals) keep track of complex legislation, pending changes, new interpretations and evolving case law to provide you with the policies and procedures to keep you ahead of problems. FIND OUT MORE...
Understanding What Makes Conversations Difficult
Favorite Print Email 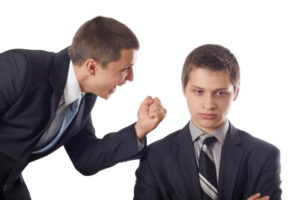 The key to doing better in our challenging conversations is to begin with an understanding of what makes them challenging in the first place. Once we understand the cause, it is easier to plan a response that is likely to succeed. Remember also that with challenging situations, they are by nature, well, challenging. As a result, we cannot expect a magic bullet response that will make these conversations ‘easy’. The realistic goal is to make them easier than they would otherwise be, and to make them more productive than they would otherwise be. To achieve that goal, we need to understand the key contributions to our difficulty with such conversations.

– The What Happened conversation creates tension because people disagree on factual issues. Their stories differ, or appear to differ.

– The Identity conversation involves difficulties arising when people have their pride and sense of self challenged (like in a performance review). Most people get upset and/or defensive when their sense of self is challenged, directly or indirectly. When these tensions erupt, conversations are far more challenging for all concerned.

To those categories, my surveys of about a thousand students over the years have identified three other general sources of difficulty in conversations – Past History, Conflicting Goals, and Challenging Communication Processes.

When people have a Negative Past History (personally or organizationally), it creates a negative filter through which any current conversation is seen, and that makes productive conversation much harder. People cannot listen to the other person’s story when they have already written it themselves. A union-management discussion does not take place as an empty slate, in which each person is heard entirely on the merits. In many labour settings, people are wearing glasses with lenses tinted by 20 or more years of perceived antagonism. Everything said and done is seen through those lenses. There is often a sense of prejudgment in the air. Since people don’t feel it is fair to be prejudged, this often provokes further identity and emotional reactions.

When people perceive the other party to have Conflicting goals or to be a barrier to achieving their goals, the competitive element of conversations is ratcheted up significantly, and the other side may be seen as the enemy. As human beings we often assume there will be opposition to our goals from the very beginning, and we then treat people as enemies to our goals. For example, you go to a complaints desk expecting them to defend the company line and block your request, so you take an aggressive tone (leading to a defensive identity reaction on their side), or you take an extreme position and lock in, or you withhold information from them which makes you look untrustworthy. When competition is our only focus, we may lose the opportunity for a cooperative response, and receive mirror-image competitive responses instead, making it a fight for both sides.

Finally, if there are Communication Process Challenges, productive conversation can be very hard to achieve even with good intentions. A phone conversation is more challenging for many of us than a face-to-face dialogue simply because we are lacking so many visual signals. Communicating in writing leads to serious interpretation issues. Put a conversation in front of an audience and it is not the same conversation anymore. A rushed conversation is rarely as effective as a planned one. As an example, one friend of mine, who is bright and interesting, is a close-talking person, and I have noticed that even people who have just met her quickly begin avoiding her because her method of communication puts them off. It takes a great deal of patience to stay in the conversation and look past its form.

In reality, all of the six challenges are potentially linked, as each one can generate the others. When a conversation is rushed (Process), it may generate significant frustration (Feelings) and if that pressure appears to be preventing you from reaching your goal (Conflicting Goals), you may become angry (Feelings) or feel like you will lose face (Identity). If an old adversary (Past History) confronts you with a raised voice in a public place (Process) with a disagreement about past events (What Happened), you might become defensive/fearful/angry (Emotions) because your sense of self is being threatened (Identity).

Several tools are good initial responses to try (a conversational first aid kit as it were), because they are low risk approaches with a high potential to improve the challenging behaviour. These include: a) asking good sincere open-ended questions (and listening sincerely to the response); b) not reacting negatively oneself; and c) taking a break even for a few minutes to calm down and plan your response (do this analysis). Even these low risk tools however, are dependent on how they are communicated. If someone is upset and you brush them off saying “I can’t talk now.” don’t be surprised when they get more upset. Contrast that with saying, in a sincere tone:

“All right, I can see this issue has got you very upset. I do want to see if we can work through this together, and I would really appreciate it if you could give me just five minutes to lay this stuff down, and gather my thoughts because I want to devote proper attention to this with you. I just need to clear my head of this other stuff first if you don’t mind.”

Again, there are no magic bullets, so we must ask:

1. What is the difficulty?

3. How might I respond effectively, if that is the root cause? And finally;

4. Try the response that is most likely to help the conversation, and least likely to do further harm.

Remembering these simple steps will help make any conversation more productive and less stressful for all involved. Every conversation is different, and what works for one person may not work for another. What works at work may not work at home. If we can avoid leaping to negative assumptions about the other person and their behaviour, our ability to choose responses that might actually work is greatly improved. And if your first attempt to improve a conversation fails, don’t give up, learn from the response to what you tried, and try something else.